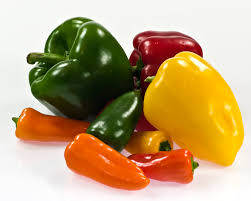 Bell peppers can be easily grown and is a good choice for your home garden, I have had the privilege of watching my mother in law grow them in her garden and it was a delightful sight to see as they mature and grow so healthy not to mention harvesting them and being able to eat off our own labor. Nothing like harvesting vegetables from your home garden.

Have you ever wondered why bell peppers are three different colors, Over the years I believe this was a question that stood somewhere in the back of my mind, and do you think the color really matters, It’s amazing though that when

mixing these three colors together in a salad or some other dish the effect these peppers can bring, making that salad or that dish more delightful or inviting.

What’s amazing also is in supermarkets red and yellow bell pepper cost a whole lot more than green bell peppers. Now let’s dive in and learn some fun facts about these peppers.

Besides nutritional facts what else is green bell pepper good for, green bell peppers have been known to improve our lung function, fights cancer, repairs tissue, helps with vision, helps your immune system, and repair cells.

The  Vitamins that are found in yellow bell peppers aids the body in its fight against heart disease, helps boost the immune system, aids in blood sugar level and helps fight against cancer.

Red bell peppers are red because they are fully mature, at this stage, these peppers have a sweet taste. Red bell peppers can also add not only that beautiful red color to the many dishes that are prepared but also give that sweet flavor.

The Vitamins that are found in red bell peppers can help to fight prostate cancer, breast cancer, Heart disease, boost the immune system, helps fight against lung cancer, and can aid in weight loss.

While it’s wonderful to hear all the good things bell peppers can do, If peppers are overcooked they can lose their strength. Therefore it’s better to eat them raw in salads or if you must cook them, do not overcook but rather cook them to the point where they will

still have some crunch to them, in this way you will still have some of the nutrient content. But in my opinion, I still believe that uncooked is better. So let’s make these beautiful veggies a part of our diet.

We are happy for your support