Growing and caring for a yucca plant 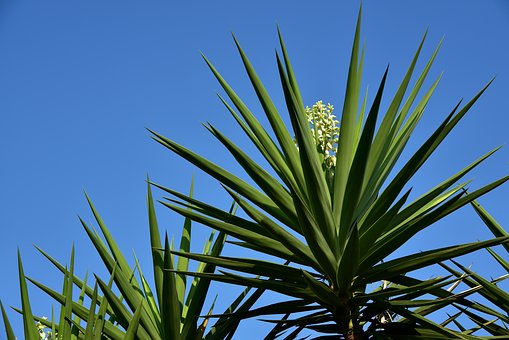 A perennial evergreen plant that is drought-tolerant which can be grown both out and indoors is the yucca plant. There is said to be more than 20 species of these garden beauties which gives you a lot to choose from. I have worked with the yucca plant on many interior plantscape projects to create beautiful designs.

The yucca plant is native to Mexico and the United States and can be found in many home gardens, these garden beauties are not fussy at all and are low maintenance. What I also found interesting about the yucca is that the extract from these plants is used in herbal dietary supplements, alternative medicine, and soaps. For more on the growth and the care of the yucca plant continue reading.

Installing your yucca plant in an area that gets full sunlight will do wonders although the yucca plant can thrive in partially shaded areas.

Because the yucca plant is drought tolerant they prefer a soil that is well-drained to keep them growing healthy and happy.

When watering your yucca plant allow the soil to dry out before giving them another drink, as said earlier they are low maintenance or considered to be desert plants so to much water will lead to root rot.

During the growing seasons which is spring through summer fertilizer your yucca plant with a slow release fertilizer. Before applying fertilizers read and follow the manufacturer’s label because the label is the law.

Keep an eye out for these garden insect pests

Aphids are pared shaped insects that feed by sucking the sap or the plant’s fluids which can cause injury. These ting garden insect pests is easy to eliminate. The use of a strong spray of water from a garden hose will help or applying insecticidal soap will bring these garden insect pest under control.

The yucca weevil is said to be the most difficult to control because they do damage by burrowing into the crown of the yucca plant. There is no known cure except to keep your yucca as healthy as possible with best cultural practice.

There are many species of scale insects. These garden pest cause plant injury by injecting their piercing-sucking mouthparts into the plant’s leaves and extracting the plant’s fluids or sap which can lead to yellowing and browning of the foliage.

Scales are tiny insects with bodies that resemble and armor, these garden insects pest remains in a fixed position or motionless but pay that no mine because the damage is being done. This feeding can also lead to sooty mold. Applying neem oil or insecticidal soap will bring these garden insect pests under control.

These garden insect pests do damage by piercing and sucking the plant’s sap or fluids, the damaged or punctured area will become brown, a contact spray such as insecticidal soap will eliminate them.

Two-spotted mites are very tiny and the only thing that is seen is the damage of your yucca plant as its health declines, spider webs may also be seen on the foliage. They are also sucking insects and cause damage by piercing and sucking the plant’s fluids. The use of insecticidal soap or neem oil as mentioned earlier will also bring these garden insect pests under control.

Mealybugs are very common among garden insects pest and feed on a host of garden plants. Mealybugs can be easily identified by a white waxy mealy covering that looks somewhat like cotton. These bugs can cause the seem damage as aphids, mites, and scales. The use of insecticidal soap will bring them under control.

Disease of the yucca plant

The disease of yuccas includes. 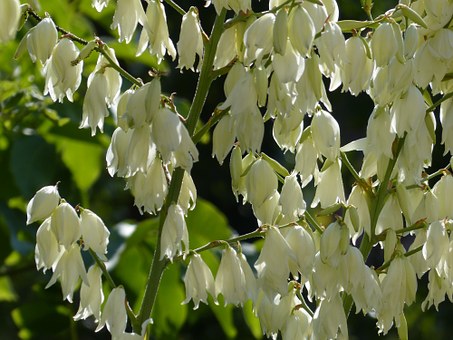 This disease is caused by a fungus, the symptoms include threads which are white and coarse that grows on the plant. Lesions which are circular develope from white to a dark brown as they are allowed to persist.

To treat this disease prune the infected parts and place in a tightly sealed plastic bag or prune and then burn, also keep the garden area free of debris and as sanitized as possible along with the use of a fungicide.

The fungus which is responsible for this disease causes the older leaves of the plant to take on brown and yellow spots. A black to purplish border also appears around the lesions, the lesion once spread will kill the entire leaf.

Keeping the planting area free and sanitized from debris, pruning and properly disposing of infected parts, the use of a fungicide which contains chlorothalonil, watering your yucca from the soil level and the use of a soil that is well-drained will bring this disease under control.

Cercospora Leafspot causes the leaves to be spotted or to have colored freckles, as the disease persists the spots becomes brown. Treat this disease by removing and disposing of the infected parts along with treating with a fungicide and watering your yucca from the soil line to control the spread of spores.

This disease which is caused by a fungus causes the edges and the tips of the leaves to turn gray and die. Lesions will also appear on the leaves in a circular pattern with and of color. Control gray leaf spot by ensuring that the soil has good drainage along with watering your yucca from the soil level keeping moisture of the leaves.

Fusarium Stem Rot is a disease which there is no cure. Yuccas which are infected with this disease stems turns soft followed by rot. The infected area also produces a round red substance which is the fruiting bodies of the fungus. The use of sanitized tools and soils which are contaminated free will help in treating this disease

Ideas on where to install the yucca plant

Here are just a few places to install your yucca plant.

1. Install them as a backdrop in a garden plant bed

2. Installing them in containers and placing the containers on either side of your front door’s entrance or on your patio or porch is a good idea.

3. Yuccas can be used as a specimen or stand-alone plant.

4. Plant them alongside a bare wall will bring that much-needed flavor.

5. Place them alongside a fenced area.

Growing yuccas from containers is another great way to care for these plants, when installing yuccas in containers the containers should be large enough to support your yucca depending on the size of your yucca at planting.

The soil should be a good potting soil that drains well, also the container should have drain holes to allow for water drainage. When watering give your yucca a good drink and then allow the soil to dry before watering again. Remember yuccas don’t like wet feet or waterlogged soil which can lead to root rot.

Fertilizer your yucca plant as mentioned earlier and keep an eye out for garden insect pests and disease which was also discussed. The container should be placed in an area that gets full to partial sunlight for your yucca to perform at its best.

Growing and caring for the yucca plant indoors

Bring nature indoors by installing the yucca plant, Place the container in an area that gets full indirect bright light. A south window is a great spot to place your yucca, The temperature can be anywhere from the mid-30s – 90s with humidity which is moderate.

Once you have given your yucca plant a good drink of water allow the soil to dry before watering again. During the growing seasons which is spring through summer fertilize monthly with a quick release plant food. Before applying fertilizers read and follow the manufacturer’s label. Keep an eye out for garden insect pests and disease as mentioned earlier.

It is recommended that if your yucca plant becomes top heavy remove half of the trunk, this will stimulate new growth that is healthy and bushy.

What I love about yuccas is that they can be used both out and indoors and they are drought tolerant, These garden beauties also produce flowers which are an added feature which I believe are reasons why you should give this plant a try. The yucca plant a garden beauty that is worth the investment.

We are happy for your support